Excellence, energy, and excitement!  These three attributes describe the Public Safety Training Facility!  The Training Office, in partnership with the Maryland Fire and Rescue Institute, provides day and evening public safety training to career and volunteer personnel, recruits, and other divisions within Frederick County Government.

We take our commitment to serve the citizens and visitors of Frederick County seriously and know that, in order to provide the best service, we must keep our skills sharp.  With energy and excitement, we work tirelessly to be excellent in all that we do!

On Friday, May 10, 2019, the Frederick County Division of Fire and Rescue Services welcomed 22 new members to the Department. The ceremony for Recruit Class 24 was held at the Frederick High School Auditorium.

The class motto was “Prove It," which represents 22 well-trained, disciplined firefighters of high moral character that are knowledgeable and capable of making sound, educated decisions in their professional and personal lives and recognize the importance of working in unison in order to achieve an objective. RC24 is comprised of individuals with varying previous work experience from a hotel concierge,  to a disc jockey, to a pig farmer. Five members are prior military, representing all branches. Of the five, two are combat veterans doing a tour in the Persian Gulf and Ramadi Iraq.

The Recruit Class Commander was Lieutenant Dan Winters. The training academy is managed by Battalion Chief Lenne Stolberg, Captains Jon Newman and Kathleen Harne. Thanks to the many instructors who helped make Recruit Class 24 a success!

Enjoy the graduation video below!

We are very proud of Captain Mullendore's special recognition! In addition to his station assignments, he was also assigned here at the Training Academy for a few years, where he had many responsibilities and was a true leader as our lieutenant prior to his promotion and transfer back to the field. Congratulations Captain! Click picture to view video with County Executive Jan Gardner and Fire Chief Tom Owens. 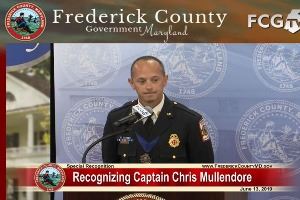